Back to the start…

It seems appropriate that when you are launching a new website and posting to your new blog for the first time that a bit of the history of Ballywire is shared. The idea for Ballywire was born during the US Presidential election of 2004. For my sins I was domiciled in New York, close the UN building. Always attracted to the Big Apple and it’s buzz when the opportunity arose to spend some time there I jumped at it. For the duration of the then US Presidential campaign I filed news reports to Today FM and TV3 on the mood on the ground as George W. Bush beat John Kerry to The White House. It wasn’t all politics though. Then Today FM Producer Jenny Kelly was kind enough to ask me to do a few colour pieces on NYC including ‘The Sex and the City Tour’ and a new craze at the time ‘Dating in the Dark’! The craic that summer was, to quote former Waterford senior hurler and proud Lismore man Dave Bennett – ‘Unrale.’ While everyone harbours the thought of ‘What would it be like to work here’ when they visit Manhattan, truth is you would need to flip a fair few pizzas before you get a break there. With Tipp lads Padraig Naughton from Nenagh and Declan Kelly from Portroe leading the heavy weekend social charge, the grá for the auld sod proved too strong and I was happy to return to Today FM towers after George ‘Dubya’ was inaugurated. While there though I ended up covering other stories of Irish interest. There was an unbelievable evening in Brooklyn when U2 turned up on the back of a trailer to launch ‘How to Dismantle An Atomic Bomb’.

A journalist is always nosing around for stories and I remember attending an American Ireland Fund gala dinner thinking, there’s great content here that could be of interest back home. At the time the idea of sending big files via the internet wasn’t that prevalent. I was recording audio and these were sizable enough .wav files but not massive by todays standards. They had to be downsized to MP.3 and were sent back to Ireland and relayed on air here, thus the idea of syndication of content (initally audio) was born. When I got back home Enterprise Ireland were running a Digital Media/Entrepreneurship programme which seemed like a good idea and this the impetus for Ballywire began to gain traction. Initially working with brands to provide content around their sponsorships. The first client we landed was BT. I remember meeting BT Young Scientist and Technology Exhibition organiser Mari Cahalane in City West to talk about this great new venture (adventure!). I always was of the view there was a rich vein of content and stories at the BTYSE that would be of interest to an even wider audience. Thankfully Mari agreed and 10 years later we have just completed a decade of collaboration on what is Europe’s biggest annual education and science fair. Needless to say one had to mark the occasion, but how? Sculptor Jarlath Daly is a highly rated artist and we commissioned him to develop a piece of art to an interesting brief. 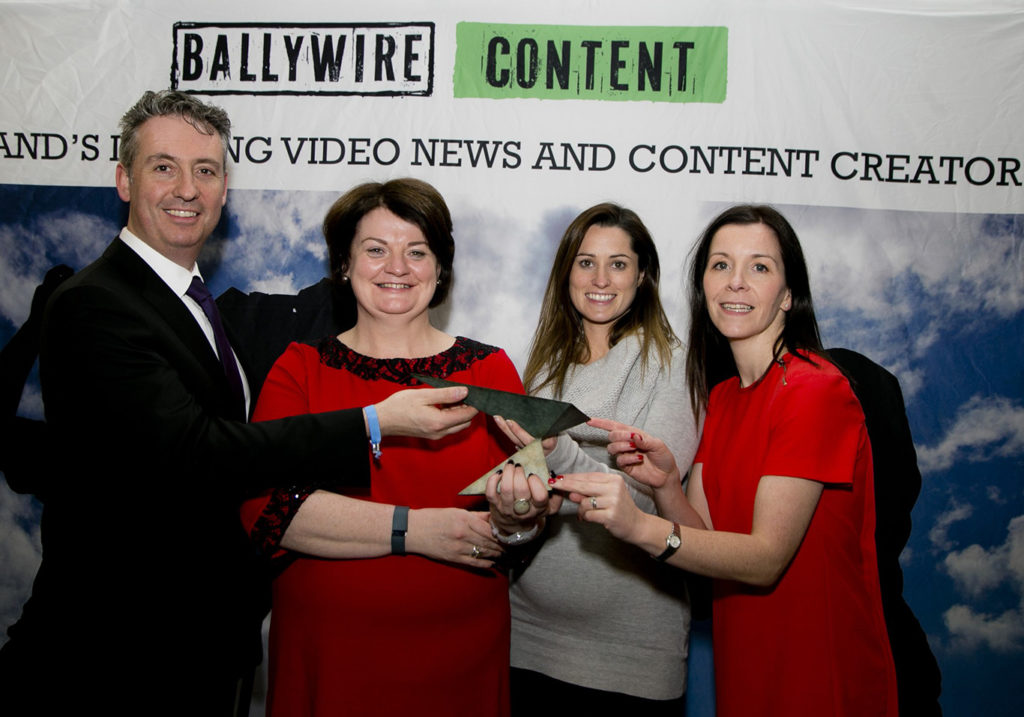 ‘Something to convey education, science and the fact that there is a Holy Trinity of Mari Cahalane, Priscilla O’ Regan, Gina Kelly that we now collaborate with on the BTYSE’.

‘Leave it with me’ said the bould Jarlath and after the 2016 BTYSE we presented Mari, BT MD Shay Walsh, Gina Kelly and Priscilla O Regan with the specially commissioned piece just after the winners ceremony in the RDS this year.

It was a small thank you to mark 10 years. A thank you for the belief in an idea and the first lesson in business: cherish your clients!